Bob was very professional. Came into the home because we are experiencing major temperature changes in our upstairs bonus room. We are expecting our third child and would like to use the space as a guest room. It is freezing in the winter and extremely hot in the summer. He did a complete inspection and provided easy suggestions that we could do ourselves as well as new upgraded insulation for the space. We highly recommend this company and Bob's expertise. The work will be completed sometime in the near future.
Elizabeth W. of Carmel, IN
On a scale of 1-10, I give Lindley Heating & Cooling a 10 in professionalism & performance.
R. K. of Indianapolis, IN
Saturday, September 22nd
Thank you so much for your prompt attention in regards to my furnace!
Natalie W. of Indianapolis, IN
Monday, April 29th
I had service done by your Serviceman, Justin. Thanks for a great, informative, complete service by your serviceman, Justin. He was professional and very good at his job.
Larry C. of Indianapolis, IN
Tuesday, February 23rd
We have used Steve Lindley’s company previously to install a full new geo-thermal system which we are very pleased with. Last week we had Lindley Heating and Cooling come out to do a Home Performance Assessment ($99). Robin and Brad did a detailed duct pressure testing, and they thoroughly inspected our attic and our crawl space. They also used an infrared camera to let us see through the walls to locate “hot spots” where we were losing energy. Robin was very thorough about explaining all the details of the testing process, analyzing the data and educating us about various causes for our heat loss and possible solutions for those problems. He proposed 3 possible things we could do including duct sealing with Aeroseal, a crawl space encapsulation, and removal of our old attic insulation to allow for the sealing of can lights and vents and then replacement of insulation in the attic.  After much discussion and a night to “sleep on it”, we decided to first do the Duct sealing. The duct sealing is a very interesting and involved process! I had watched some video clips on their website and understood the process. They completely blocked off all the vents and air returns in the house, hand sealed any obvious leaking sites then pressurized the system and released the Aeroseal to move throughout the system sealing up any places that air was leaking in or out of the entire system. (Best analogy is that this process  is like using “seal a flat” for your tires!) Their computer analysis showed that before we started we had total air leakage equivalent to a 33 square inch hole and when we finished, we now have leakage equivalent to a 1inch square hole!  Brad and his team arrived this morning at 8:30 and did not leave until 4:30. They arrived on time, worked hard all day, were courteous & professional, and cleaned up completely.  We are very pleased with the work and we will watch to see the differences we will experience in the house and with our electric bills! We have also decided to get our crawl space encapsulated next week because we have a ¾ basement that has a direct opening to our 400 square foot crawl space. The dampness and air contaminants from that area need to be blocked from entering the entire house.  We will update you later with how that process goes!!
Judy R. of Indianapolis, IN
Tuesday, July 15th 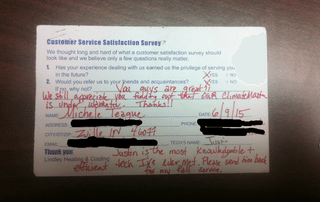 You guys are great!! We still appreciate you finding out that our ClimateMaster is under warrenty. Thanks!! Justin is the most knowledgable and efficient tech I've ever met. Please send him back for my fall service.
Michele T. of Zionsville, IN
Tuesday, June 9th
Thanks for always being there for us. Of course, we only want Steve to come! He always exceeds our expectations and leaves our home as clean as it was when he arrived.
Mr. & Mrs. Garth-Gunther of Brownsburg, IN
Sunday, June 23rd
Everyone was courteous & my problem was resolved quickly. I appreciate the quick service.
C.W. of Brownsburg, IN
Wednesday, November 13th
Justin performed our service. He was very respectful and efficient. We will definitely be using you guys in the future!
James D. of Brownsburg, IN
Wednesday, June 10th
Steve, it has been a pleasure working with you and your team at Lindley. Thank you so much for the many extras you do for us. You have more than earned our trust! Thanks for being such a great company that we can rely on!
Donald M. of Brownsburg, IN
Tuesday, July 21st 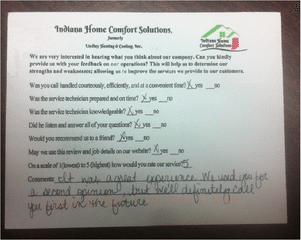 It was a great experience. We used you for a second opinion, but we'll definitely call you firstin the future.
Michael Y. of Brownsburg, IN
Monday, June 22nd 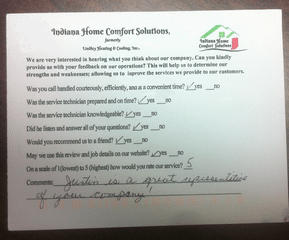 Justin is a great representative of your company!
Dina G. of Brownsburg, IN
Monday, June 8th 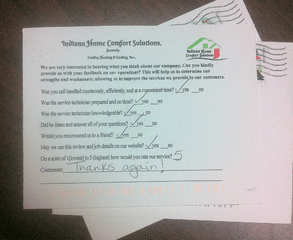 Thanks again!
Mike H. of Brownsburg, IN
Sunday, June 14th
The technician arrived 20 minutes early. He called me first to let me know. Once he was inside, he wore booties over his boots. The same tech has been out to my house for the last two years and my wife and I have been pleased with his professionalism. We have been using Lindley Heating for about nine years now and we have no complaints. The first three years, we used other service companies.
William W. of Avon, IN
Friday, March 11th
Advanced appointment set, technician called morning of appointment to confirm and arrived on time. Technician did a great job explaining what he's going to do while on the job and continued to explain and illustrate things to watch for to avoid costly equipment damage. He explained his evaluation of my 2 home HVAC systems and even offered multi-year savings on energy savings plan.
David S. of Avon, IN
Friday, March 4th
Total testimonials : 40

We serve the following areas